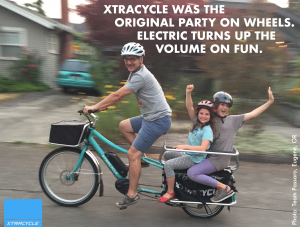 I was never keen on having an electric-assist bike. I guess I though it would defeat the purpose, right? Maybe I had just gotten older and more curmudgeonly than I realized. I like bikes the way all my other bikes have always been, thank you very much.

I’ll make a long story short to just say my wife and I now have an electric-assist cargo bike, an Xtracycle EdgeRunner 8e.

Having ridden around on it for several months now, I can tell you I was missing the whole point of electric-assist. And at least the way it is implemented on this bike, it is not what I expected.

Lots of people who stop and ask about the bike seem to assume it’s like riding a motorcycle or a “moped” or a Vespa or something — like you just sit there and cruise along.

“It’s hard to describe,” I say, which is true, because it’s not like anything I really experienced before. The best I’ve come up with to explain it, comes out as a joke.

“It sorta makes me feel,” I tell this person, “like I’m Lance Armstrong … fully doped up.”

I don’t know if it’s appropriate to joke about Lance Armstrong at this point — or doping, for that matter. Or to compare something as wholesome as a cargo bike with all that sordid nastiness.

But, what’s it like? It’s just like riding a bike. But you feel a bit super-human — even with 130 pounds worth of kids on the back.

And, no, you aren’t doing anything illegal, unethical, unhealthy. All to the contrary, in fact.

That’s how it “feels” when you are riding. But the biggest eye-opener for me — the thing that has totally changed my view of electric assist — was that it goes way beyond just being “fun” to ride faster than you can normally ride, or up steeper hills than you might otherwise manage.

My epiphany was how this makes the whole concept of a bike way more practical as a form of transportation in an ordinary person’s day-to-day comings and goings. And it does so while still keeping just about everything that is cool and fun about riding a bike in general.

I’m probably more “hardcore” than most people about riding my bike wherever I go around town. But I still fall prey to the occasional thought that, “Oh, I can’t ride a bike there. It’s too far.” Which means either it’s too hard and I don’t feel like it, or it will just take too long. Most of us are busy — and sometimes lazy, right?

That reason/excuse doesn’t come up as often now.

Yes, the EdgeRunner is a pretty heavy bike — especially the e-version with the motor and battery adding some weight. To ride this bike without electric-assist on, is to feel a bit sluggish. It’s doable, sure. I’ve run out the battery a time or two and managed. But I have become more diligent about charging it regularly.

I’d say in some ways, engaging “Eco” mode, the lightest touch of the four levels of e assist available, makes it feel basically like I’m riding my regular around-town road bike (on a day I’m feeling really good!). It basically compensates for the weight and size of the bike, with a little extra boost beyond that.

As you click up through the levels: “Tour” next, then “Sport,” then “Turbo” you simply can go faster with the same effort. But you are still riding a bike. “Assist” is the operative word in “electric-assist.” You can’t just sit there like a bump on a log.

You get exercise. You just go farther, faster with each turn of the pedals. On “Turbo” I can basically cruise along at 20 mph without showing up somewhere tired and sweaty. Intensity-wise, it’s like going for a brisk walk.

And this is what I mean about practicality — not even getting into the whole cargo thing, how much it’s possible to carry. I’m talking about practicality of, “I have to drop the kids at school at 8:05 a.m. and then I have to be across town at my office by 8:20. Is that possible?”

Well, if you are talking about an urban setting with traffic and stoplights, and you’re talking travels of 2 or 3 or 4 or even 5 miles, look at it this way: If you can do it in your car in that amount of time, you can probably do it on an e-bike, nearly as fast, if not just as fast — especially if you factor in the time you spend finding a place to park the damn car.

Here’s something I tested in my real everyday life: It’s about 2 miles to my kid’s school. When we all ride our regular bikes, it takes 18 or 20 minutes. That’s great fun, and the kids get exercise, too. But if we’re running badly late because one kid or the other has lost a shoe or something, and I decide we need to drive the car, it takes 9 minutes to get there.

If I load both kids on the back of the EdgeRunner and put it on “Turbo,” it takes 12 minutes. Then from school to my office, another 15 or so. Which is basically a wash compared to driving — as far as time goes.

If I factor in the fact that I’m getting exercise, that I’m not paying for and burning fossil fuel (well, maybe tiny amounts if we want to be clear-eyed about where electricity comes from), that I don’t have to find or pay for parking, that I’m putting less wear on the roads, that bike tires and maintenance costs way less than car tires and maintenance, and that, yes, it’s just more fun — it’s not even close which I would rather do.

I still ride my regular old bike-bike quite a lot. But when it comes to electric-assist, even for an old skeptic like me, I’ve learned it is a game-changer in how much more practical it makes using a bike for transportation. I don’t think I understood this very well before I actually experienced it. I’m a believer now.

Bob Passaro is a partner in a web design and branding agency in Eugene, Ore., where he also volunteers with organizations advocating for better, safer multimodal streets.