Perhaps the most life-changing thing you’ll do with your Xtracycle is ride with your kids. Family biking is a great way to spend time together and have fun with your loved ones, and there’s no better way to help your kids get comfortable with the idea of biking as transportation. There’s a number of ways to set your bike up, depending on how many little ones you’re carrying and how old they are. Read on for tips on starting, stopping, loading and unloading, and carrying kids with cargo. 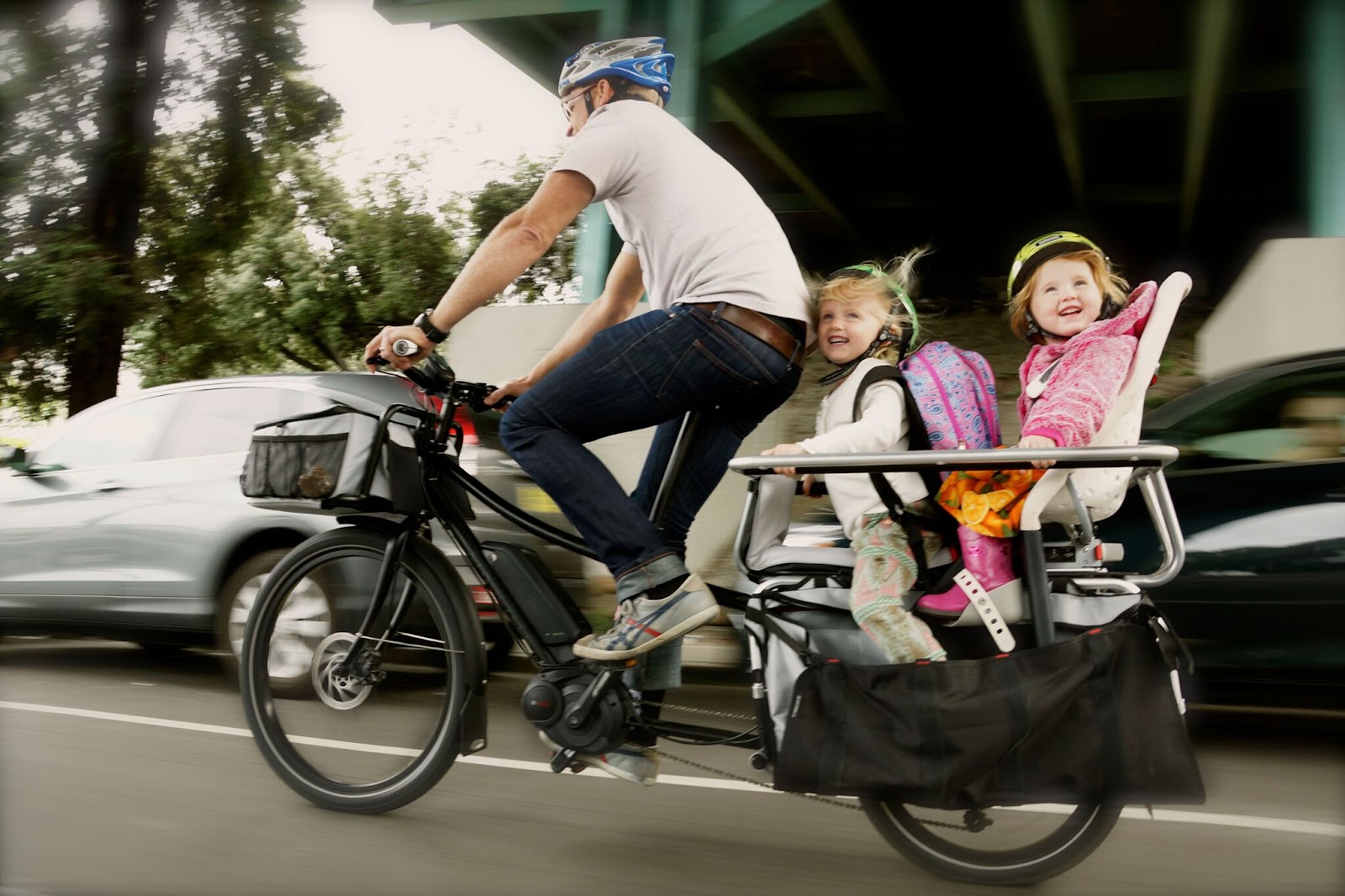 From One to Four

Everywhere you look, you’ll see a different recommendation for how old kids should be before you put them on your bike with you. The most basic consideration is muscle development: can your child hold their head up without support? Xtracycle and Thule (the manufacturer of one of the child seats that our bikes are compatible with) both recommend a minimum age of 1 year for reliable comfort and safety, but it also depends on you feeling comfortable riding with your child. In most states, the legal minimum age is 9 months so be sure to check with your local laws and consult your pediatrician before riding with children under 1 year old.

Once your little one is ready, they can ride with you in one of the child seats compatible with our bikes. If you don’t have a compatible Xtracycle deck, you can usually swap your existing deck out for one that will work. Email us at support@xtracycle.com if you need help figuring out what to get! These articles might be helpful to you if you are: 1)
trying to figure out what deck you have so you can buy the proper seat, 2) trying to figure out if the deck you have can properly fit a child seat and if an adapter is required.

These seats range in age and weight limitations, with some accommodating children as young as 9 months old up to 40 lbs/18 kg (be sure to consult a pediatrician for children under 1 year old). Once your child outgrows the child seat, you can usually ditch the seat and switch to a Hooptie handrail (we recommend kids are at least 4 before they ride in a Hooptie without a child seat).

If you’d rather keep your little one in your sights at all times, you can also install a
Thule Yepp Mini or similar front mounted child seat to start out. These seats are quite a bit smaller, and mount in front of you rather than behind. They will carry your child from 9 months to 3 years old, up to 33 lbs/15 kg (be sure to consult a pediatrician for children under 1 year old). Once your child outgrows the front mounted seat, you can transition to a child seat on the rear deck, and then on to the Hooptie and/or SnackBars.

Once your little one reaches the age of four, they can ride footloose and fancy free in an Hooptie handrail. The Hooptie keeps everyone in line while you do the pedaling, and provides a place for small hands to hold onto. It has a narrow setting and a wide setting, meaning you can adjust the width between the bars as necessary. (these measures are true for the
RFA Hooptie and the Hooptie LT2. The Hooptie 2021 for the Shimano eSwoop and eStoker include longer rails) 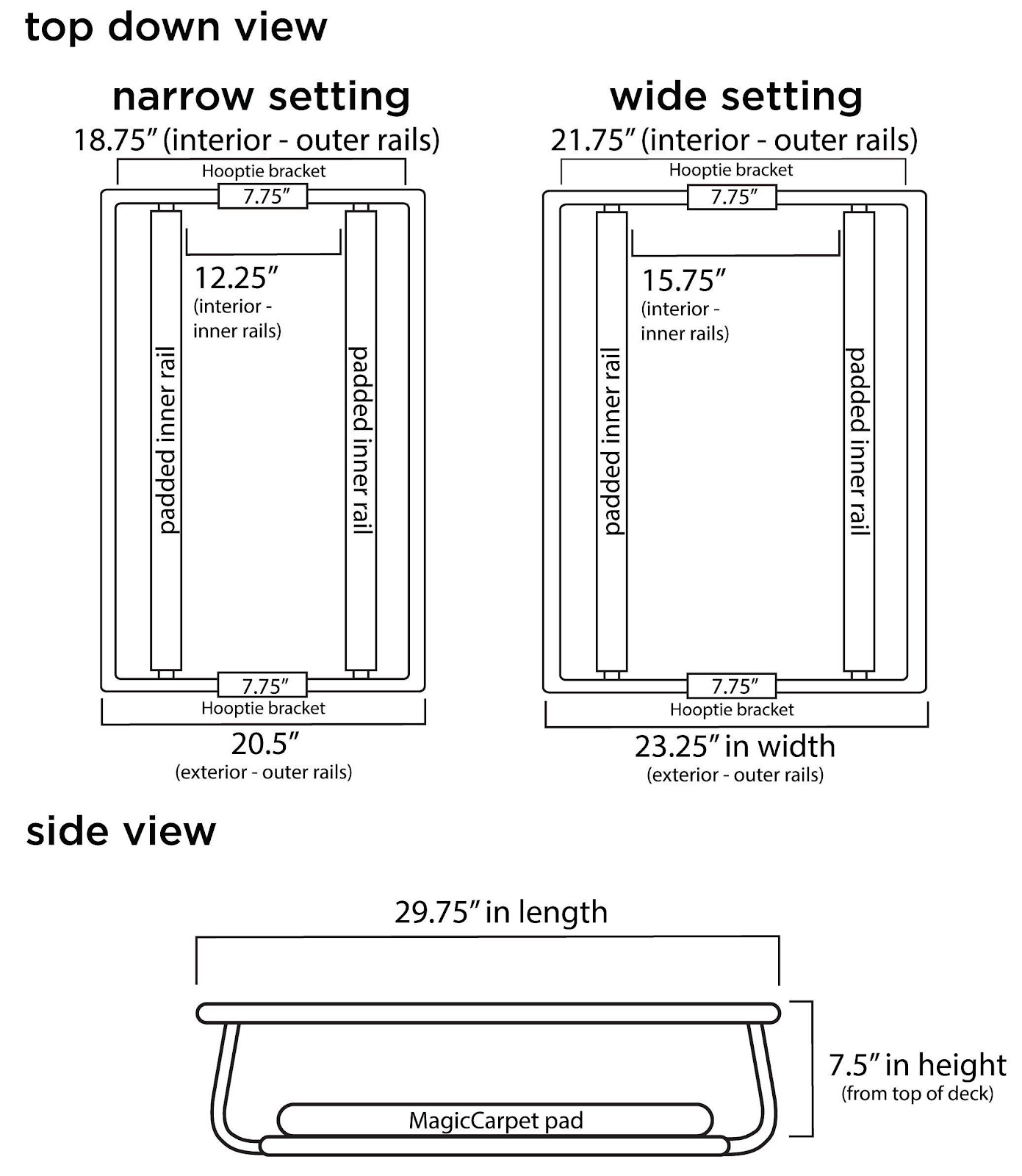 We recommend the addition of a MagicCarpet to cushion behinds from bumps. A set of EdgeRunner U-Tubes, RFA Utility Footsie, or RFA Sport FootPegs will give your passengers a comfortable place to put their feet.

Depending on the number of passengers you intend to carry, we likely have the ideal ride for you. Every setup will look different depending on the ages of the passengers, and it will change as they get older.

How many passengers can each bike carry? Here are the most ideal rear passenger set ups for each Xtracycle model:

Keep in mind that these rear passenger numbers don’t take into account that you can add a front seat or rear trailer to increase the passenger carrying capacity of your bike. So for example, if you added a front mounted child seat to an RFA Sport and a rear trailer, you could carry up to 4 children: one in the front, one on the rear deck, and two in a trailer. If you intend to carry multiple little ones under the age of four, you will need a child seat for each child.

An Xtracycle longtail deck can accept a maximum of 2 child seats. The RFA Sport and the RFA Utility decks can only accommodate 1 child seat. On all Xtracycle models, you can always add a front mounted child seat for a younger child. The weight limit on these  seats is lower than that of the rear child seats, so hopefully by the time your littlest is over 33 pounds, the other child or children are big enough to hang out in the Hooptie on the rear deck, with no need for a child seat. If this isn’t the case, the little ones might be taking turns on the bike for a while. If it’s worth the investment, you could look into pulling a trailer with your Xtracycle until everyone’s ages line up. You can read more about installing a trailer on your Xtracycle
here. Once each child turns four, they can ride directly on the rear deck with the Hooptie and/or SnackBars.

On the RFA Utility and Xtracycle longtails, you can use a Hooptie and a child seat together by adjusting the Hooptie to its wider setting. This will allow the child seat to fit in between the bars. Put a single child seat in the rear position on the deck, so the other passengers aren’t cut off from the rider and you have the heavier children riding closer to the middle of the bike. This is a pretty cozy setup for the children not in child seats so you might look into running a magic carpet over the deck and up the front of the Hooptie for extra cushioning. Here is a picture of a magic carpet folded on the deck of the RFA Sport: 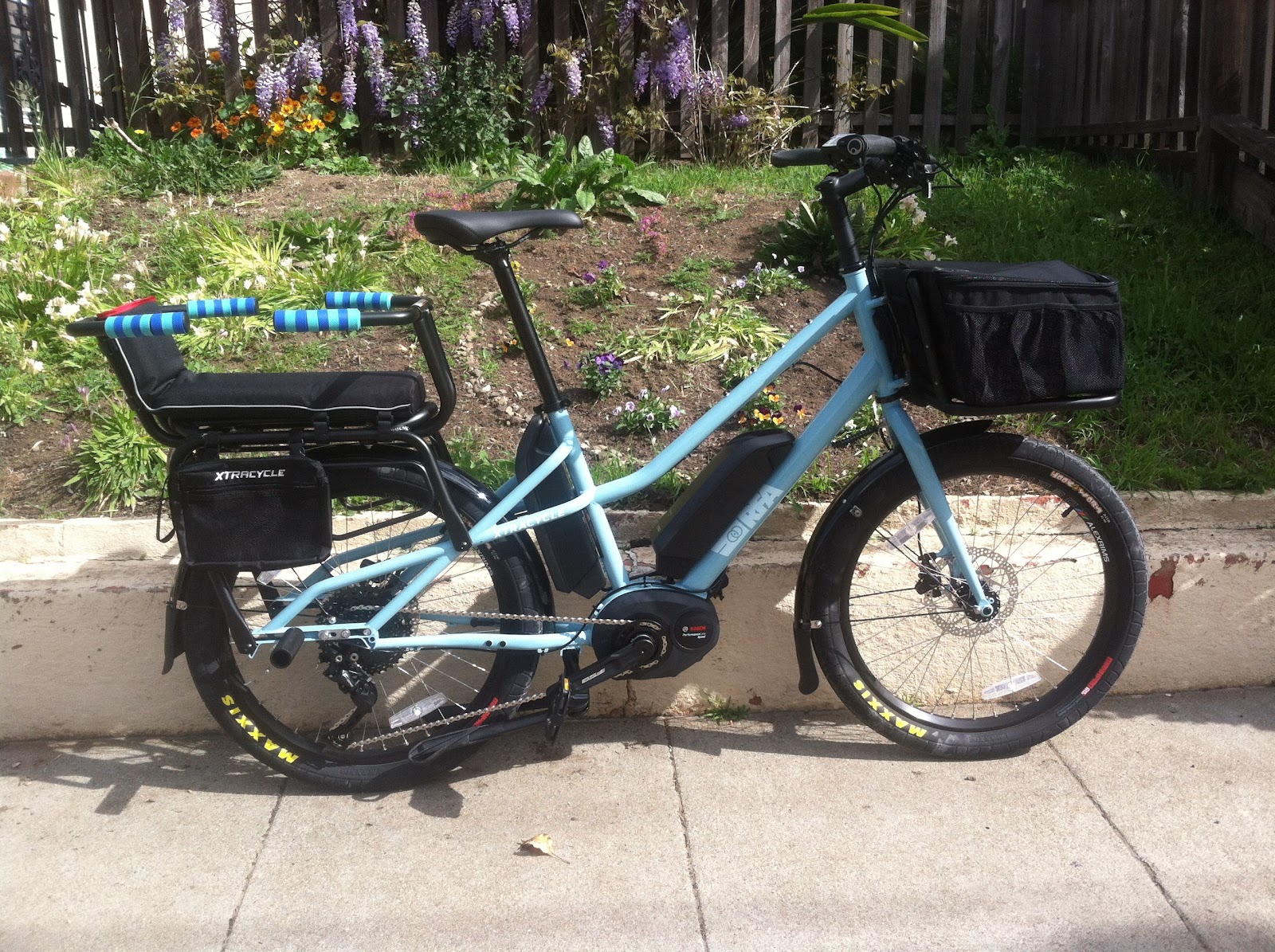 For added comfort for kiddos with legs long enough to touch the ground, foot rails are a great option. Here are the options we offer for each bike model:

Looking to carry 3, 4, 5 or even 6 kids on your Xtracycle? Check out our article on carrying up to 6 kids on a longtail
here.

If you are carrying older children directly on the deck of your Xtracycle, you can use the SnackBars instead of the full Hooptie rails or a combination of the two to make getting on and off the bike easier for your passengers. Here are the dimensions of the SnackBar. 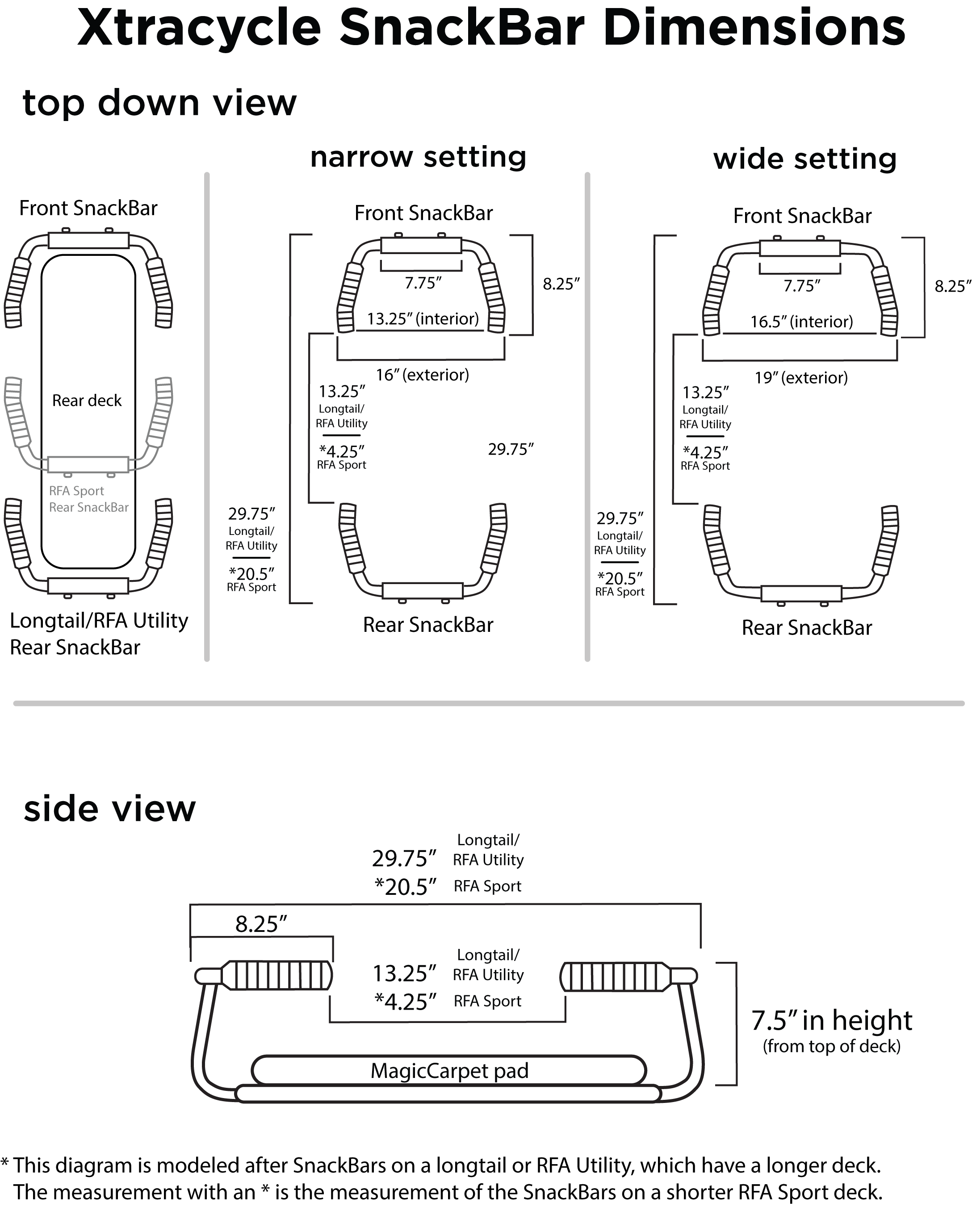 Here are some examples of how the SnackBars look on a rear deck. 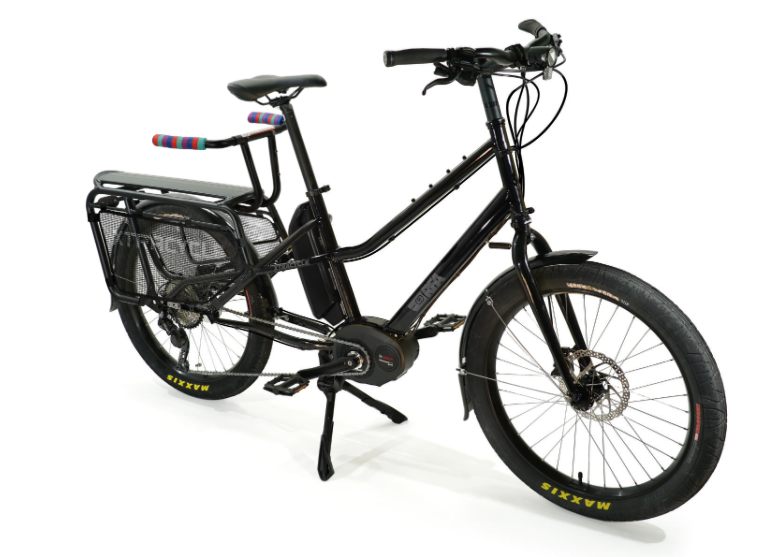 RFA Utility with Hooptie rail on one side and SnackBars on the other side: 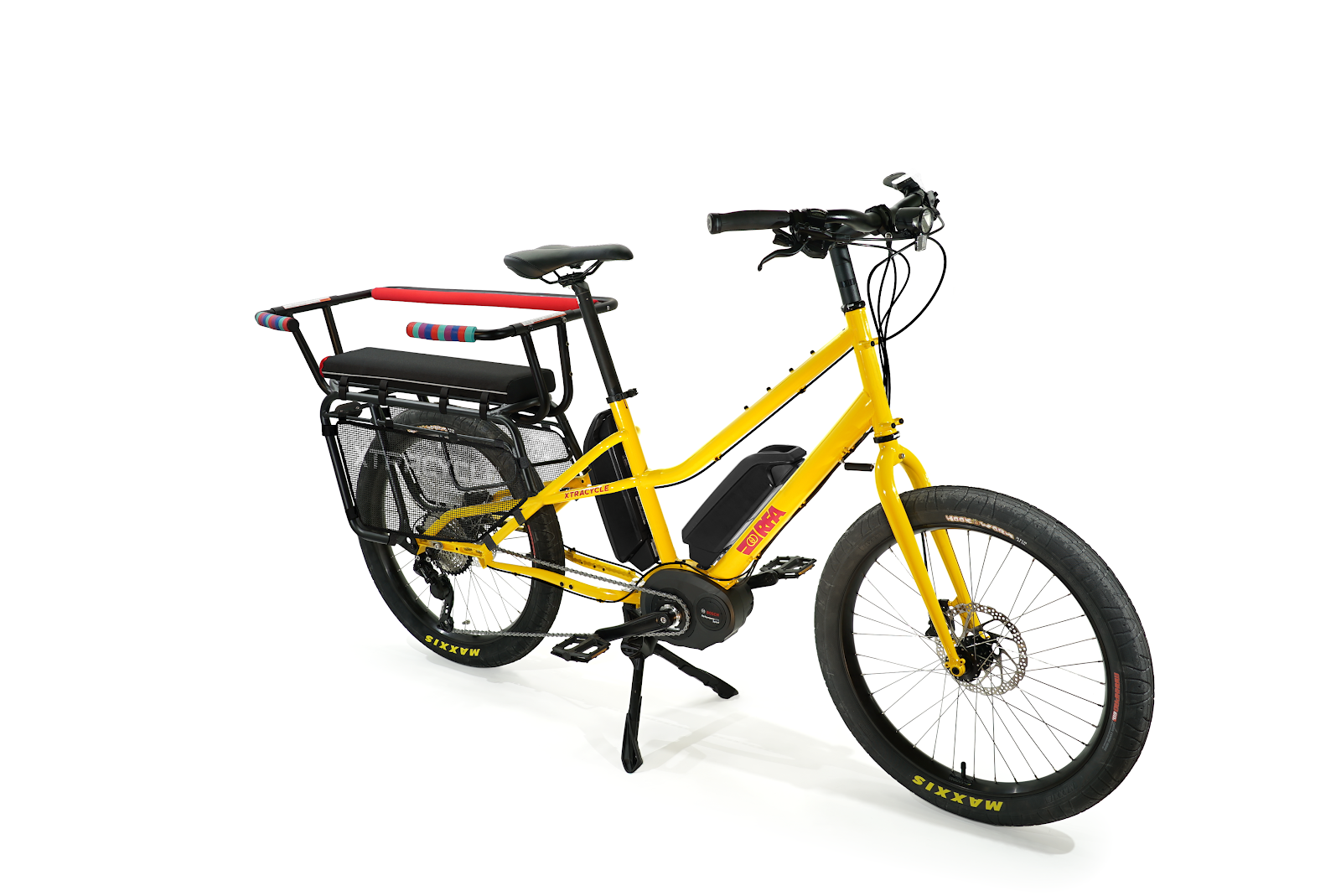 The
SnackBars (which come in pairs) allow older kids to more easily mount and dismount from the deck. If you prefer, you can keep one Hooptie rail installed on the non-drive side (traffic side) of your bike and install one SnackBar at the front and one SnackBar at the rear. These create a gap, or “door”, through which your kids can more easily get on and off the deck.

The SnackBars will also make it more comfortable for adults to ride on the back of your bike as they won’t feel so constrained.

Starting and Stopping with Passengers

While it doesn’t take any special abilities to carry passengers on your Xtracycle, it does take a bit of practice to get the hang of managing the extra weight.

We highly recommend riding your bike first without any children on board so you can get a feel for the handling of the bike. Once you’ve got that down pat, add one child and ride around a little to get the hang of it. Starting from a complete stop might feel a little wobbly and unstable at first but you’ll quickly adjust to the extra weight. Once you get going it won’t be hard to balance, and with a little time you’ll be able to maneuver the bike easily even at slow speeds.

Get in the habit of shifting down to a low gear (the gear that allows you to pedal more quickly) as you come to a stop, as this will make it significantly easier to get going again. Brake gently, and start applying the brakes well ahead of when you’ll need to stop to avoid jolting your passengers. The disc brakes spec’d on Xtracycle bikes are powerful so you can stop on a dime if the need ever arises – keep this in mind during your first few rides!

The dual kickstand on your Xtracycle (either the KickBack or if you have the RFA, an Ursus Jumbo) provides a way to keep your bike upright during all the loading and unloading you’ll be doing. Make sure the bike is on stable, flat ground, and the kickstand is fully engaged before loading and unloading passengers. Check that the rear child seats are firmly attached on the rear deck before lifting children in. Kids over 4 can be lifted into the Hooptie, or they can climb in under the bars if the Hooptie is on its wide setting.

When unloading the bike, you’ll want to dismount and engage the kickstand before unloading your passengers or allowing them to climb off. Keep in mind that a double kickstand will lift one wheel off the ground slightly, and you may feel the bike rock forward or backward on the kickstand as you shift weight around. Always be cautious when loading and unloading passengers.

You can absolutely ride with kids and cargo at the same time – It’s just a matter of how you load everything. If you’ve got child seats on the back of the bike, you can remove the rain lids from the bags and let the child seat footrests hang inside the cargo bay on either side (otherwise it can be difficult to load stuff into the panniers). Kids’ legs can hang over or around loads of stuff, or they can ride side-saddle in the Hooptie.

Here is the Yepp Nexxt seat on the RFA Utility with the RFA Cargobays: 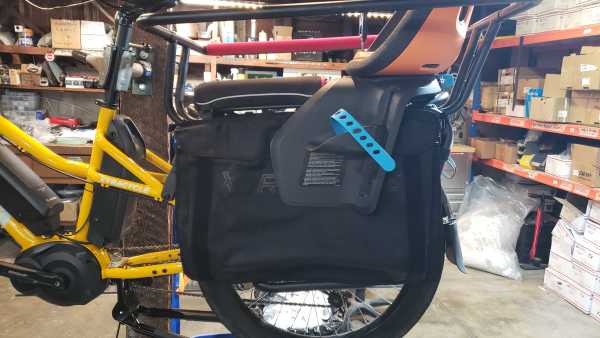 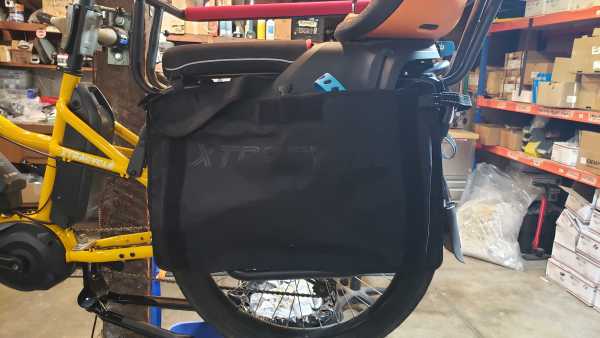 Here are a few examples of the Yepp Maxi seat on a longtail bike with both the X3 Cargobays and the Slingset: 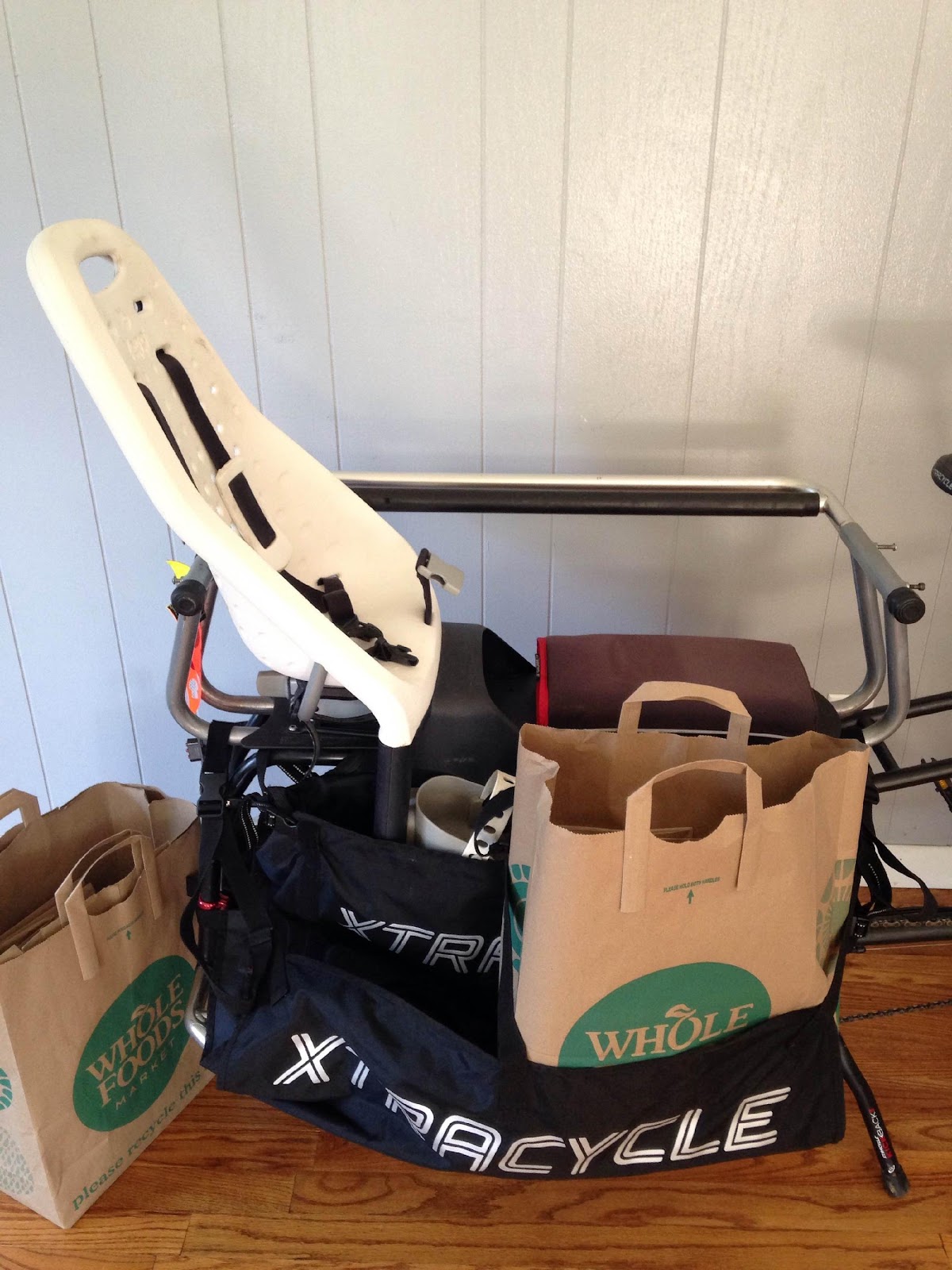 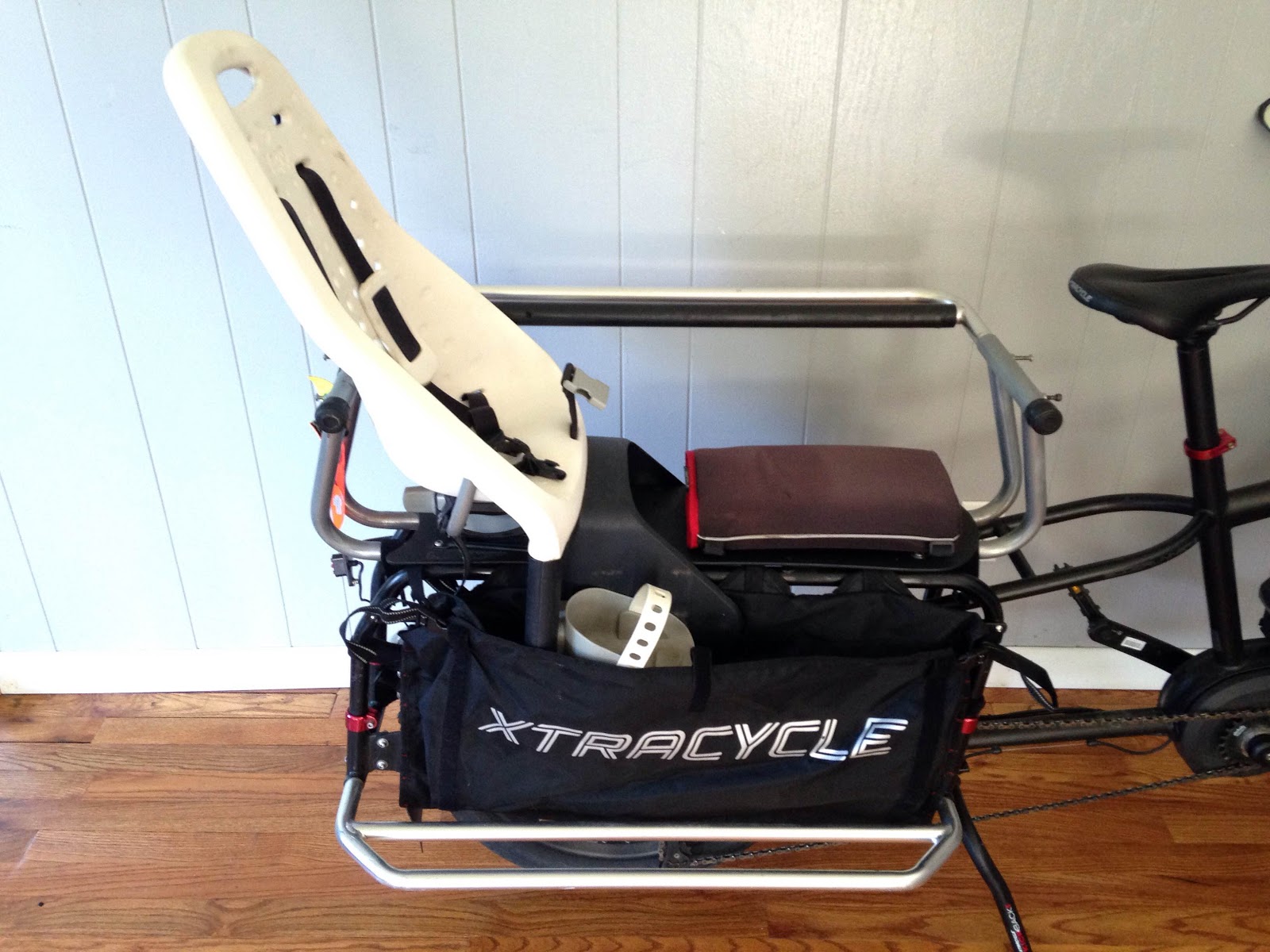 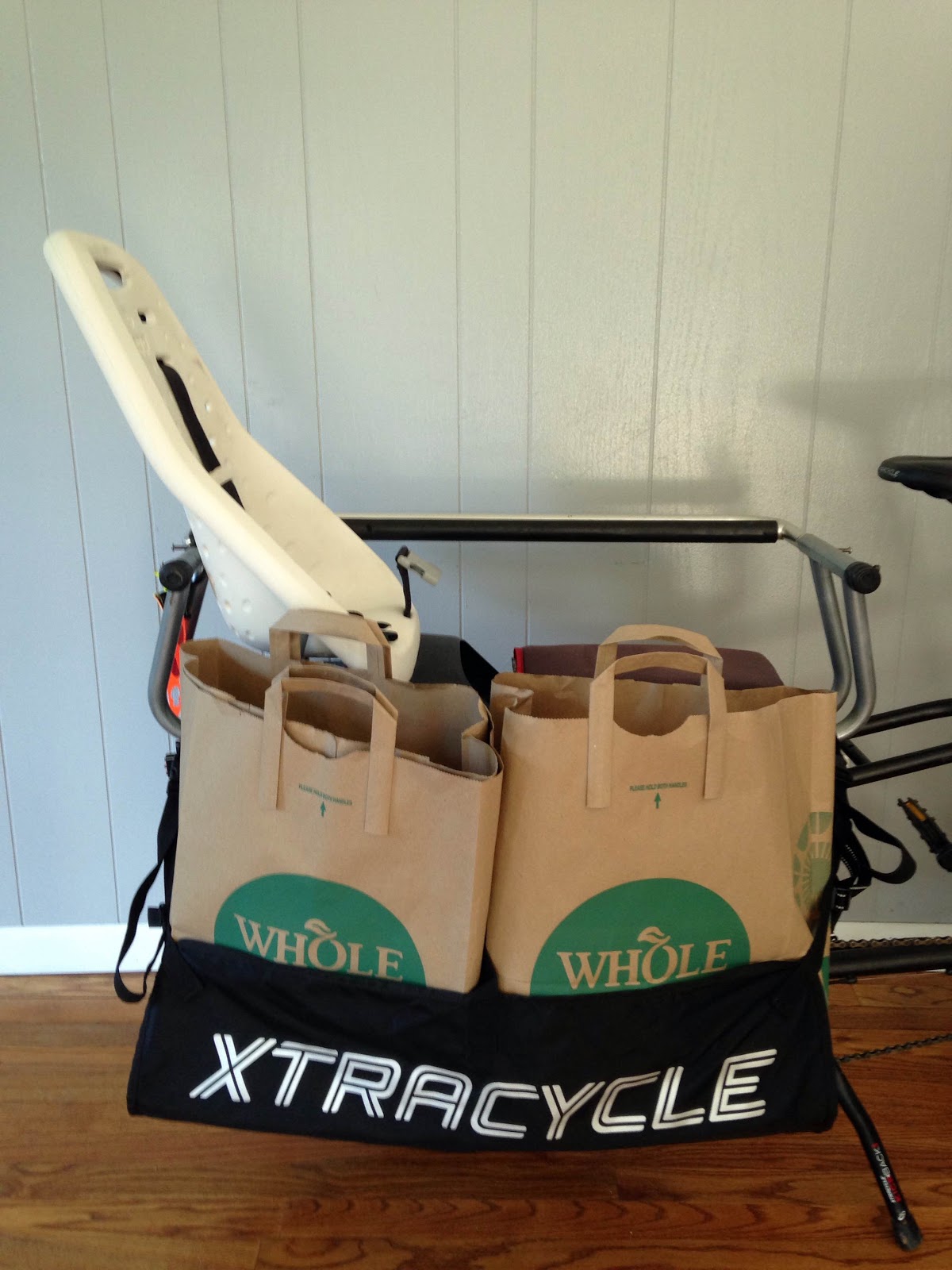 Have additional questions about riding with kiddos on an Xtracycle cargo bike? Drop us an email at  support@xtracycle.com and we’ll answer your questions best we can!