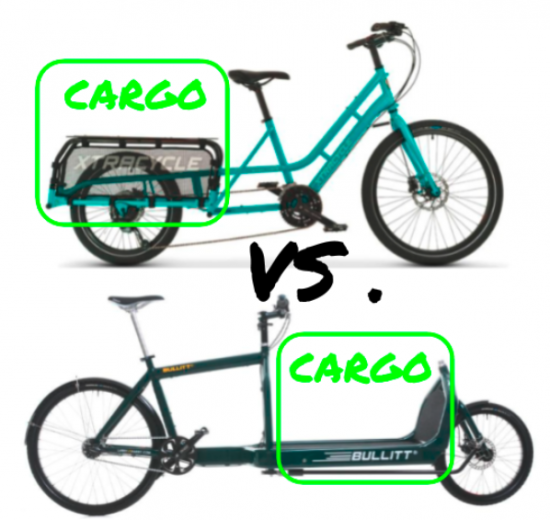 1. What cargo do you plan on carrying?
This is probably the most important question.  You’re deciding on the type of cargo bike to buy after all!   What shape of cargo will you be carrying? I haven’t seen anything that a long tail, like the Xtracycle EdgeRunner, can’t handle (think Christmas tree, ironing board, dog, etc.).  However, for specific cases like transporting bulky and awkwardly-shaped things like a small table, mini fridge, etc., front loaders may have an edge.  This is a very specific case though. Speaking of cargo…

2. Will you be carrying kids?
If so, how old are they?  Front loaders can accommodate infants.  We put The Forgotten One in a car seat strapped into the Bullitt starting when he was three weeks old (for strolls around the neighborhood block): 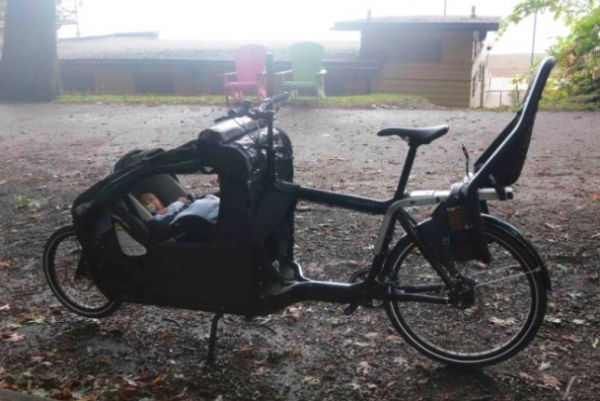 We waited until he was about 10 months old before we put him in a Yepp Mini on the Edgy (he squeals and claps with joy every time; it’s the best): 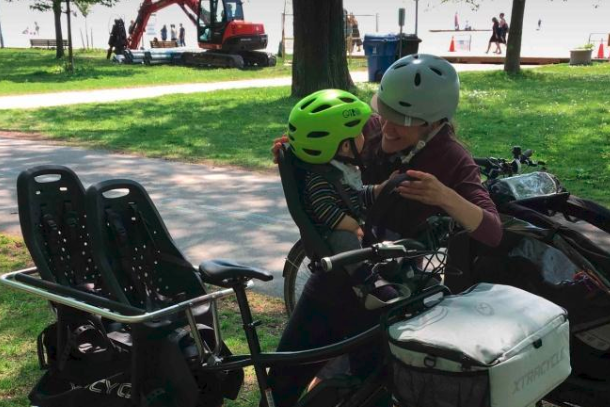 If your kids are older, a long tail may make more sense.  There’s more room at the back of our Edgy for longer legs.  And using a MagicCarpet seat cushion, an older child has more freedom to move around, face forward or backward, etc.  Sticking two older kids side by side in the box of a front loader just means it’s a countdown to when a fight begins. While some front loaders have bigger boxes, the size and weight of the kids will be a constraint at some point.  Here’s a Kodak moment when the kids were aggressively nudging each other: 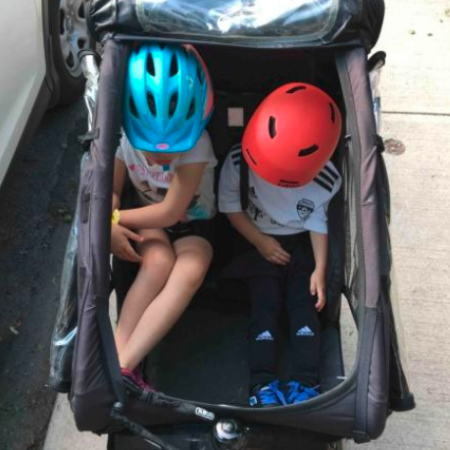 On the topic of growing kids, at some point they will start riding on their own, starting slowly and for short distances.  This is when a long tail shines because it’s better at towing bikes. It was really awkward trying to pack The Peacemaker’s Frog in the box, whereas the Edgy’s foot rest tube thingies seemed to be made to tow a child’s bike: 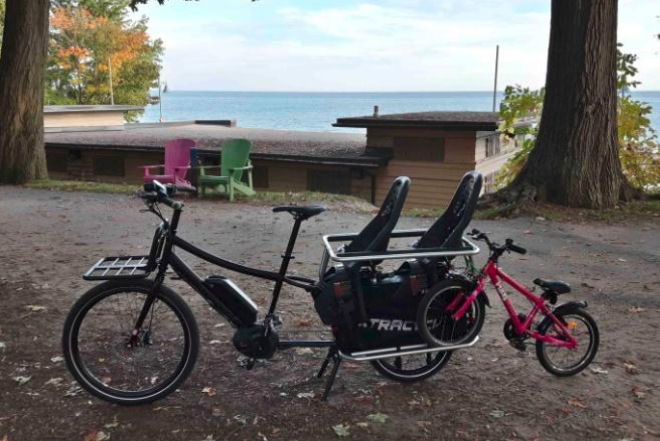 In summary, front loaders can easily carry infants and small children while long tails are better for older and bigger kids.

3. What type of weather will you be riding in?
The makers of front loaders typically have a ready-made canopy accessory that shields kids (and cargo) from the elements.  This may not apply to you however if you don’t plan on riding in the rain, snow, or extreme cold. 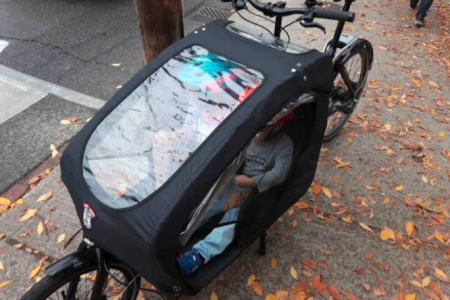 On the Edgy, the little Prospects are surprisingly resilient when it comes to rain.  A raincoat and a helmet with a peak (or a hat beneath the helmet) go a long way to stem the whining: 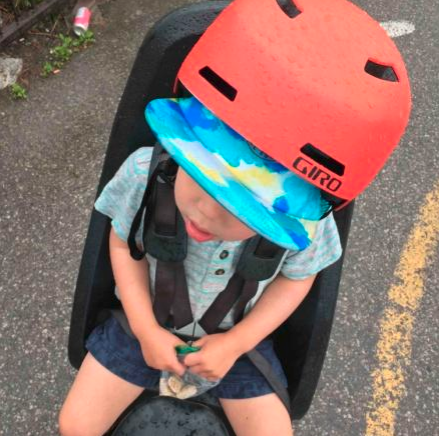 Xtra team here: Check out our article on hacking a moped rain cover to make for the perfect long tail rain cover! 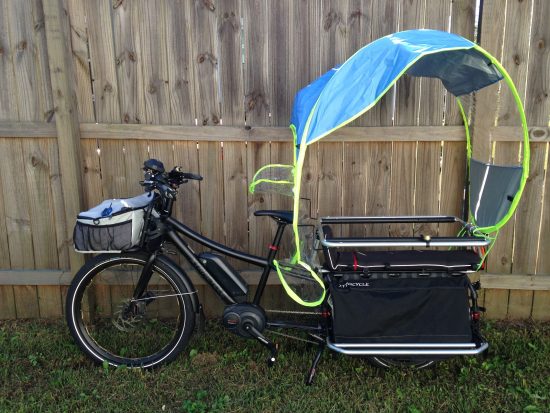 They do complain about being cold though, but a “bunting bag” solves that issue: 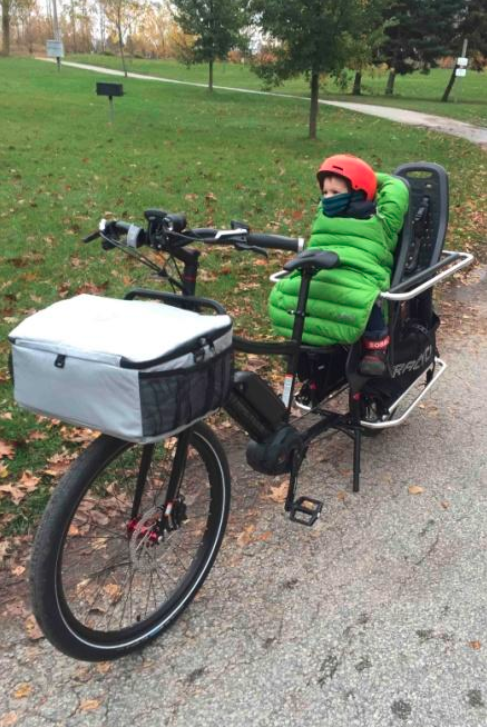 In the cold, the little Prospects gear up with a beanie under their helmets, a neck warmer and even ski goggles for code-red level of cold and snow.  As the saying goes, there’s no bad weather, just bad clothes. Of course, hot chocky is your trump card to encourage winter riding: 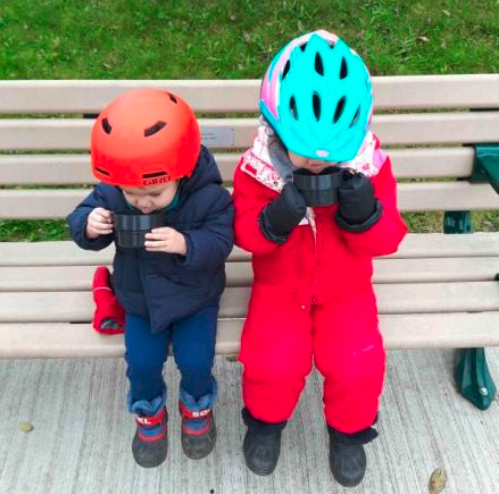 In summary, if you will ride in all sorts of weather (and want to keep kids protected), then a front loader wins out.  However, if you will be more of a fair weather rider, either will work.

4. Can you learn to ride with “linkage steering”?

Long tails ride like a normal bike.  If you can ride a bike, you can ride a long tail just like that (picture me snapping).  Front loaders are less intuitive and require you to learn linkage steering. This means that the front wheel is still controlled by your handlebar but via a connected rod, arm, of whatever the technical term is.  This may feel very unnatural for you initially and an extra challenge when you’re already dealing with cargo.

Curbside Cycle here in Toronto, where we purchased our Bullitt, told me to take in around the block and that was that.  I had a few oopsy daisies but overall got the hang of it pretty quick. Then I got better and more comfortable riding over the following months.  Not everyone feels this way as I’ve come across blogs with people complaining about the annoyance and inability to ride with linkage steering. Mrs. Prospect has only ridden straight stretches on the Bullitt (as of the time of writing) and is much more comfortable with the Edgy.  Here’s Mrs. P walking the Bullitt to get a feel for the steering: 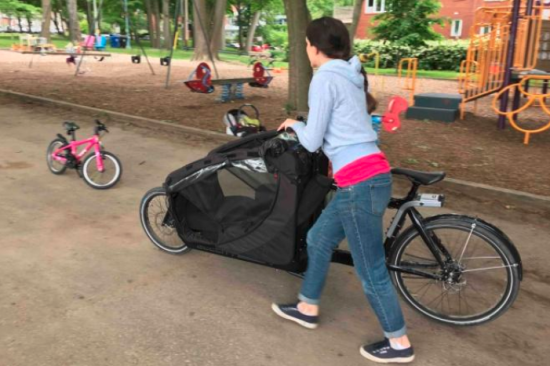 5. Where do you prefer your bike’s center of gravity?

The Edgy is the best of the best when it comes to long tails having a low center of gravity.  Its smaller 20” back wheel means that cargo sits lower for better balance (and ultimately, a better ride).  However, the box of a front loader is naturally even lower (there’s no wheel beneath). This means that it’s more stable, handles fast turns around corners better, and it doesn’t tip as easily.  These are indisputable facts. But even facts can be misleading. It’s important to remember that once you’re comfortable with riding with weight, neither bike should be an issue with tipping. Mrs. Prospect and I both have dumped the kids on both bikes.  They were all “controlled” dumps though while we’re either stopped or going at a snail’s pace.  No kids were even scratched in the process (or processes we regretfully admit). They took place during the earlier part of our learning curve and have not happened since.  The likely scenario is with either bikes, you’ll take time to ride with increasingly heavier loads and learn your limits at your own pace with a few “controlled” bumps along the way that’ll speed up your learning.

6. How do you want to pack your cargo?

With front loaders, you can throw your cargo in the box without thinking much about balancing weight.

Long tails require you to think about balancing the weight of your cargo when packing.  Not that it’s especially difficult: cartons of milk on one side, laundry detergent on the other, while loafs of bread go on the top deck, etc.  Easy Peasy lemon squeezy (lemons go in the Porter Pack).

Side note: the Edgy’s PorterRack with PorterPack in the front is amazing.  Many a times Mrs. Prospect reaches forward for her phone, a snack for a whiny little P, etc. during a ride.  It is way more handy than we originally thought. 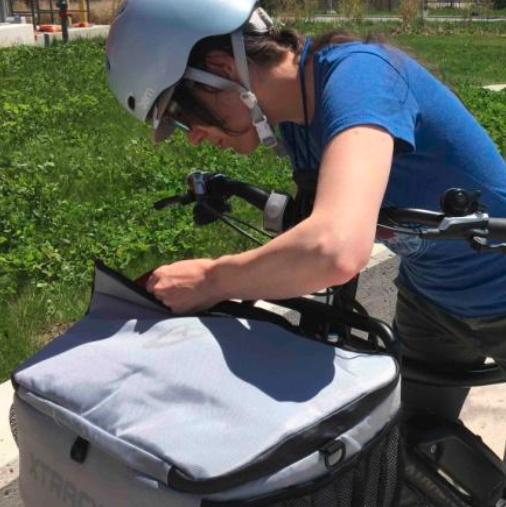 7. How will you store your cargo bike?

Storage can be a real issue given the length of these bikes.  Front loaders tend to be longer and awkward to maneuver in tight spaces.  Our Bullitt is surprisingly nimble in tight spaces but I’ve never tried to lift it up vertically given the weight of the box.  The Edgy can be stored vertically in our living room with ease 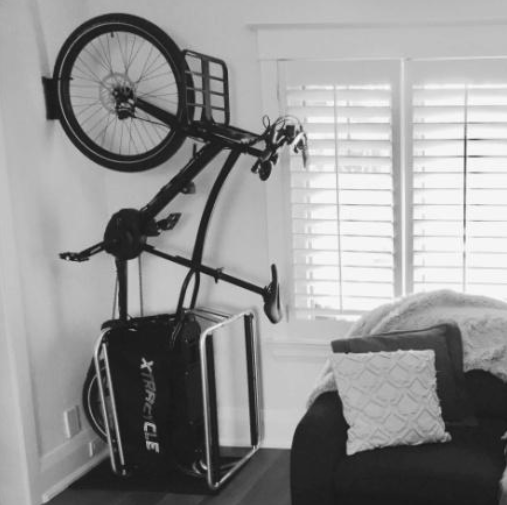 The Edgy’s frame at its rear acts as a sturdy base when storing the bike vertically as you can see above.  The Bullitt is longer so you need a high ceiling. You also need to remove the back wheel’s fender every time you want to hang it up, not to mention the weight of the box makes it challenging to store it vertically.

8. How important is it to transport your cargo bike?

Long tails fit better in traditional bike racks.  It’s just a longer bicycle after all. This became apparent when we had to park our bikes on the train to Niagara Falls (future post coming!) 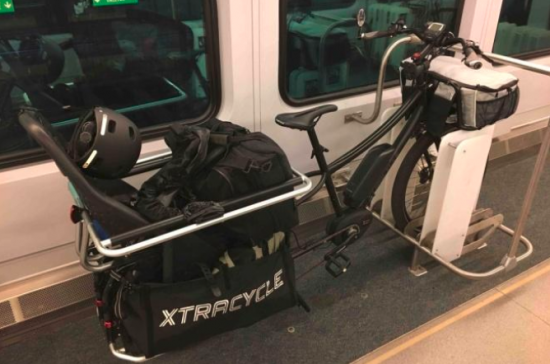 The racks were designed for regular bikes, understandably.  Or is it understandable!?!  Hmm…. Anyway, long tails are generally easier to transport.  For example, you want to put a long tail on a car rack or car roof?  I’ve seen it done before. Front loaders are much more difficult to transport with a vehicle.

9. How important is riding comfort?

This is a bit of a minor point.  But overall, the Edgy’s big apple tires win out.  They’re pretty darn cushy over bumps. A bump or two shouldn’t matter but you can tell the difference during a longer ride.

Let’s round up with a discussion on budget.  The basic stripped down model of a long tail is generally cheaper than the basic model of a front loader.  However, you need to account for the accessories that is required to maximize the utility (and enjoyment) of your ride.  Long tails may require more accessories to carry out the same task as a front loader. If you have a hard cap on your budget, or want to add accessories incrementally, a long tail may be the way to go.

In Toronto anyway, it seems like the resale value for both is equally attractive. I’ve thought about life after the kids grow up and to be honest, I can’t imagine ourselves getting rid of either cargo bikes.  We will continue to want to do things like grocery shopping on our bikes. We’ll likely just add “regular” bikes to our fleet in the future as required.  But who knows. Mental note: report back to readers in seven-ish years.

For the Prospects, we were committed to riding, as a family and with cargo.  We got rid of a vehicle and really thought deeply about a cargo bike’s tangible value (e.g., payback period without monthly parking and transit passes and gym memberships) and intangible value (e.g., how much is the feeling of comfortably, safely, and frequently riding as a family worth?).  You can’t go wrong when it comes to deciding between a long tail vs. front loader. And test rides will answer a lot of your questions. Ultimately, our advice would be to think of purchasing a cargo bike as a long-term investment. We personally felt that it was better to spend more upfront and we have been very happy with that approach.   This blogger (Hum of the City) once came across this advice when deciding between which cargo bike to purchase: buy the bike you want to ride.  The point is that the list of pros and cons and all the logic will only get you so far.  Your gut feel as to which bike will get you out riding more is far more important. This is how you maximize family time, save money, get exercise, and wonder how you ever lived any differently.  We followed this advice and can’t be happier.

For more from The Prospects, visit www.prospectquery.com